When I started to read fantasy and science fiction, I was always fascinated by the maps that would be included as part of the books. I have yet to get through the entire Lord of the Rings series, but I have had several looks at the map Tolkien created of Middle Earth, and it helped keep things straight for me. I saw the map at the beginning of The High King by Lloyd Alexander and I still can’t keep straight where everyone is going – it just seemed like a jumble of symbols stuck around randomly on a sheet of paper. Dune by Frank Herbert had a unique looking map, but if you have the paperback version of this, it looks like he drew it using the smallest commercially manufactured pencil in existence and a magnifying glass to do the job. I think it took me about four years to totally understand it and be able to use it to follow along with the action in the book. (I needed it, too – that’s a book that has an 18-page glossary of terms and terminology because otherwise nobody would be able to keep the dialogue straight.

In classic fantasy/science fiction, the best map I ever came across was George R.R. Martin’s one for A Game of Thrones. As I have exhaustively described in this space, I was obsessed with and then bitterly disappointed with the television series – enough to try fanfiction for the first time in my life – and I have read the first book of GRRM’s series. I’ve been nervous about diving into the rest of the book series – am I going to be disappointed again? I’m not sure, but I think I’ll have to dip into it eventually.

Anyway, I really loved that first map I saw of Westeros. I immediately got a sense of place from it. I sensed the lay of the land, where all of the great events of the book took place, and an idea of the size and scale of those events as well.

The idea of who came up with those maps was something I didn’t think about, and to be honest, when I started writing this, I have to admit I was still in the dark about it. My assumption has always been that either the authors were coming up with those maps themselves, artists created them based off the author’s notes, etc., or some combination of the two. After a quick Google search over a few articles, I was happy to see that my assumptions were more or less on the mark. I was pleasantly surprised, but not overly so, that so many of the classic authors (Tolkien, Stevenson, etc.) did wind up creating their own maps, and doing a decent job of it as well.

That was something that always intimidated me as an author. I have a few talents, but drawing and art were never one of those. My wife and daughter are the members of my family that have a clear artistic talent. I might be able to put  together some squiggly lines and something that might approach the coastline of Europe and/or Africa, but nothing  that would look respectable in a cartography book, or even my own book.

This year, I was wandering around Reddit, as is my wont to do during my off-times, and I kept hearing about a computer software program by the name of Wonderdraft. It had been around for a few years, and I kept hearing about how people were using the program to create their own maps for their fantasy novels. (Another big purpose for their maps was to serve as locations for their Dungeons and Dragons or other role-playing-games.) It appeared that this was something that was going to give me the ability to create a map without having any discernible artistic ability whatsoever? I was intrigued.

It was around $30 for a full purchase of the product, which is less than I’ve spent on some games overall, either on PC or mobile. That seemed a good price for me, especially for something that was going to have far more reuse value than most games. So I was sold on it.

Although it took a little bit of time for me to successfully figure out how to download it after my purchase, the Wonderdraft people were really helpful in explaining the process once I got stuck on something. Once you get it downloaded, you can get started pretty much right away.

Getting a map started is fairly easy, and you can find yourself creating maps that have a tremendous amount of detail, like 4K quality pictures. Size can be variable too, which is helpful if you are wanting to try and put together a map covering an entire world. Whatever fits your needs, you can pretty much set up that way.

As a horrific artist, I find the “land wizard” feature pretty helpful. I could always try and freehand land masses on my map, and there are plenty of ways you can do that with a varying size and texture of “brushes.” But that would require me to have an actual talent for brushes, virtual and actual, so for me it’s helpful to just hit the wizard and let the computer do the drawing. The great advantage of that, obviously, is that it draws all of these realistic land masses without much fussing. 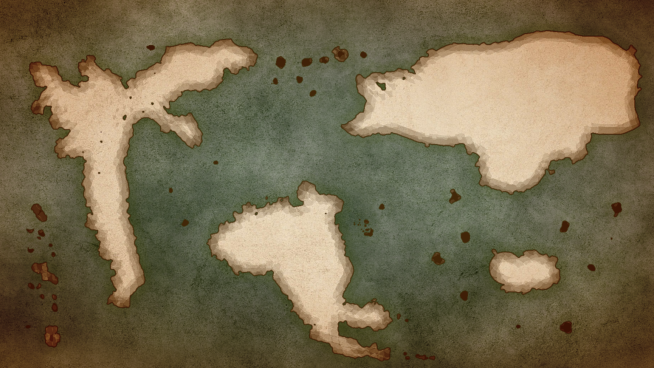 (My first try after using the land wizard and some land shaping. Be gentle.)

There is quite a variety of ways that you could set up a map. Do you want to go for a more black and white or “antiqued” flavor of map? Wonderdraft offers a variety of styles and varieties that can meet all of those needs. It has both auto and manual color schemes to allow for the coloring of land for either political or geographical (with biomes) purposes. It was hard to keep track of the different colors, so I wound up writing down the color codes I used for jungles, tundra, grasslands, highlands, deserts, etc.   Again, you have the option of having a variety of “brush” sizes and styles for these purposes.

Wonderdraft  gives you the options of using a good variety of symbols for your map, especially a variety of mountain, tree (forest), buildings, and city/town/fort icons. It gives you a default color for these icons, but you can change them if you wish. For some of my maps, I wound up coloring my city/town/fort icons a bright neon color because otherwise, it was difficult for them to show up on a map with more earth tones (pun intended).

I liked the “path” feature, where you are able to draw lines that are paths across your map. You have a variety of designs for those paths (dots, dashes, arrows, horizontal slashes, etc.) and can make them into any color that you wish. As a result, these can serve not only as paths or roads, but for country boundaries, walls, and other purposes. Likewise, the water feature (adding rivers and lakes) was a useful feature, even though I think it’s easier to make lakes in land masses by using the “lowering land” feature in the land section.

Another advantage of Wonderdraft is that you can export or turn smaller sections of your maps into maps that show more detail for those smaller areas. For example, as a fantasy writer, you might want to have those smaller detail maps for locations that have particular significance in your story.

That brings me to another point, which is that I find Wonderdraft to be equally as useful in creating maps of cities and other similar-sized locations as it does larger maps. Creating cities is where the variety of symbols that are available, such as regular buildings, city walls, cliffs/hills, ships/boats and docks, castles, farmland, and similar items come into play. Wonderdraft allows you to use all of these items and modify them for your use, such as make them various sizes, group them into different appearance frequencies, or rotate them to better place them on your map.

Although the program has plenty of interesting symbols, as I mentioned before, I found the game didn’t have that much of a variety of city-type icons, especially those that were designed to be seen from the top down. I usually prefer to lay out a city map, if I have one, from a top down perspective. Thankfully, there are many different sites out there that produce icons for the game. You can download these either for little or no cost at several sites. I used a couple different sources for those assets.

There are a couple of features that I would like to see in this game. For example, the land editor allows you to move selected landmasses to different locations on the map, and also allows you to stretch out or shrink those masses, depending on your taste. It would be really useful to allow you to flip or rotate land masses as well. Sometimes I’ve found that a continent or land mass would look much better on a map if it wasn’t oriented the way it was. As it now stands, I have to get out the landbrush and try and redraw it the way I want, and you know what I said about my artistic ability.

Despite that drawback, and some difficulties I had in properly downloading the program, I was very impressed with what I was able to do with Wonderdraft. I’m able to create a wide variety of maps using different formats and looks, despite the fact that my artistic skills are limited at best. But I was able to use this tool to start organizing the ideas I had in my head onto a page and start making them more real to me. For someone who is trying to create a new world that is significantly different from the real one we live in, being able to visualize that world is an extremely useful tool for writer and reader alike.

Made some great use of my last bit of winter break, but I think that I’m back in the writing groove. The numbers:

Six out of seven days of quota-level activity is always good, considering how I lazed around this December.

As for what’s going on:

OK, enough for now. For all you writers out there, keep writing and keep supporting each other. We definitely need it.

Good thing I promised to do this in a day or two, not right away.

Anyway, wanted to finally let you know how that conference went. I believe this is either the third or fourth such conference I have attended, and I think I learned something or got some insights from each of them. I think they have also given me more focus on my work and inspired me to take my interest in getting published more seriously.

I was thinking that this was going to be a massive post, but for reasons to be explained, it will wind up being relatively short. I will go over a few observations/points/notes in no particular order regarding the conference.

Well, I told you it was going to be short. However, if I can make it to next year’s conference, I certainly would go again.